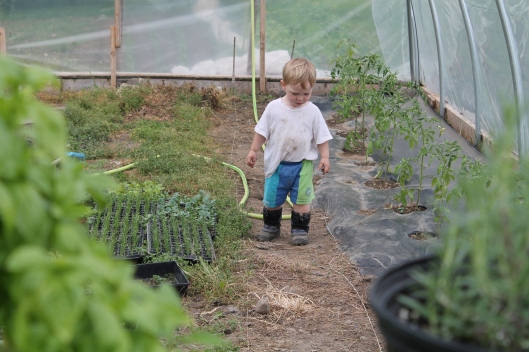 For the second time in six months, a thoughtful farmer has taken to writing in a high-profile public forum that small-scale sustainable farming is not economically viable. First, Bren Smith published an op-ed in the New York Times in August entitled “Don’t let your children grow up to be farmers.” And then just last week Jaclyn Moyer wrote a piece for salon.com entitled “What nobody told me about small farming: I can’t make a living.“

Both of these pieces are thoughtful and earnest, written by practitioners of the craft being discussed. Both pieces raise serious and important issues which need more attention in the public sphere. But both pieces, ultimately, are wrong in their assessment of the economic sustainability of small farms, and I fear they might do more harm than good.

Bren Smith rightly points out most farms depend on off-farm income. He highlights a disturbing trend that some metropolitan areas have hit a saturation point with local, sustainable foods and that farmers are beginning to have to lower prices to compete for a limited market. He laments that some high-profile, heavily subsidized sustainable farms have been artificially insulated from true market forces. He wishes he had children but thinks he can’t. And he exhorts farmers to once again take the lead in reform, as has been done in the past, by demanding and shaping a new food economy which might make farming more viable.

Jaclyn Moyer also laments that her own farm is kept afloat by non-farm income and that her farm is not profitable, despite 12 hour days, 6 days a week. She tells the story of her neighbor who had just made a meager profit of $4000 for the first time in 10 years. She details that no farmer of her acquaintance met her standard for economic sustainability: earn at least minimum wage, abide by labor laws, and don’t depend on off-farm work. She tells of the pressure to put a smiling face on her struggles so that her customers won’t know she’s not making ends meet. She relates giving a talk to a local high school, after which not a single student indicated interest in pursuing farming.

Both of these pieces are heartbreaking, and most farmers I know can relate. We’ve been there and had these thoughts and experiences. For most farmers, the conclusions are accurate.

But reading Jaclyn’s piece last week was especially jarring for me, because I had just returned home the day before from the annual conference of PASA (Pennsylvania Association for Sustainable Agriculture), where I presented on the economic viability of very small farms (under two acres) and had had the pleasure of meeting and hearing Jean-Martin Fortier, who makes a comfortable living farming an acre an a half in chilly Quebec with his wife Maude-Helene and two employees. They even have two children.

My own farming situation is unusual because in addition to raising vegetables we operate a small, on-farm, sixteen-seat restaurant two days per week, which might seems at first to prove their point. Certainly, the restaurant helps pay the bills, but as I emphasized in my presentation at PASA, while our vegetable income is low, the number of hours worked is low as well, and we pay ourselves about $15 per hour to raise vegetables. This is not a princely salary, but it is much higher than the sub-minimum wage described by Jaclyn and Bren. If my wife and I both increased our hours raising vegetables to full time, we would make about $50,000 to $60,000 per year, a modest middle-class income with winters off.

My experience was vindicated last week at PASA when I heard Fortier speak about his farm, which grosses $150,000 per year on 1.5 acres, and which provides him a comfortable, if modest, income of around $60,000. Just as impressive, Fortier emphasized that they take the winter off, don’t work off the farm, and limit their work hours in season from 8 am to 5 pm.

How can these diametrically opposed views co-exist? How can Moyer earn less than $3,000 on her 10 acres while Fortier earns $60,000 on his 1.5? The answer is complex and too technical for this platform, but the truth is that farming in an economically viable way is very difficult but possible. I have taught Latin, run a restaurant, and farmed, and farming is by far the most challenging of these three jobs. It requires a combination of skills that few people (including myself) naturally have, but they can be developed. But like all highly demanding jobs, becoming a successful farmer requires training. Learning on the fly is a recipe for frustration, and the best decision any aspiring farmer can make is to find the most economically successful farm they can and apprentice there until they have learned the craft.

Ironically, while most people accept the old adage that scaling up is the way to increase profits, Fortier has identified his scale (no tractor, mostly hand tools) as key to his success. Efficiency, fertility management, organization, charisma, passion, discipline… all these traits contribute to success in farming. Most important of all is a model, like Fortier’s, which has proven itself to be viable.

As a farmer and lover of farming, Bren’s and Jaclyn’s pieces make my heart bleed. I have nothing but empathy for them because I know how they feel. Their pieces raise essential questions too often left unasked and unanswered by foodies in the budding local foods movement. Perhaps an editor and not the authors themselves chose the titles of their pieces, and I don’t blame them for wanting a juicy headline.

But the truth is that sustainable farming needs all the help it can get, and these pieces do more harm than good. The last thing we need is to discourage a young person with a budding interest in farming. With so many cultural forces directing them in other directions, we need more role models like Fortier who show how farming is viable, rather than those who have not been successful and assume that success is not possible. I can think of no greater joy that I could receive in life than one or all three of my boys ignoring the advice of Jaclyn and Bren, and choosing to follow in my footsteps to become a farmer.

9 thoughts on “let’s show our children that farming ﻿IS viable.”