A simple but successful amuse-bouche at Esca: crostino with cannellini beans and parsley.

When I go out for a serious meal, especially at a restaurant serving exquisitely fresh and carefully-chosen fish with a pricetag to match, I don’t expect to hear Teenager in Love on the playlist.

I had been looking forward to a meal at Esca for a long time. Though I respectfully disagree with Mario Batali’s “restaurant empire” approach to his business, it’s clear he has excellent taste, at least in food. A meal that I had at Babbo was one of the highlights of the past few years, and Mario deserves a lot of credit for promoting authentic Italian cooking in a city with deep traditions of red-sauce Italian-American joints. He not only popularized authentic Italian cooking in his New York restaurants, he introduced the US to the Italian tradition of raw fish, or crudo, at his fish restaurant Esca.

It was the pesce crudo which had brought me to Esca. Although raw fish in the Italian style has now made its way onto menus throughout the country, back in 2000 when the New York Times first reviewed Esca, William Grimes rightfully called the crudo appetizers at Esca “the freshest, most exciting thing to happen to Italian food in recent memory.”

I had read several profiles of Esca executive chef Dave Pasternack, a rare breed who is both a chef and literally a fisherman, who sometimes serves his own catch alongside fish flown in from around the globe. From the little I know of him, I admire him. He seems humble. He has been content not to open eight other restaurants or become a celebrity chef. In the short-term-relationship culture of American restaurants, he has stayed committed to Esca for 17 years now. And he’s actually there — cooking in the kitchen, answering the phone — having chosen to stay actively engaged rather than delegating that most hallowed duty of cooking to a team of anonymous and poorly-paid line cooks.

So I arrived with high expectations, which were completely satisfied in some ways, but greatly disappointed in others. The highlight was indeed the pesce crudo. I selected a mixed sampler of six types of fish, each one treated individually to its own proper olive oil and sea salt, chosen to complement the type of fish it accompanied. This appetizer was one of the finest things I’ve eaten in a long time — everything I expected and more. 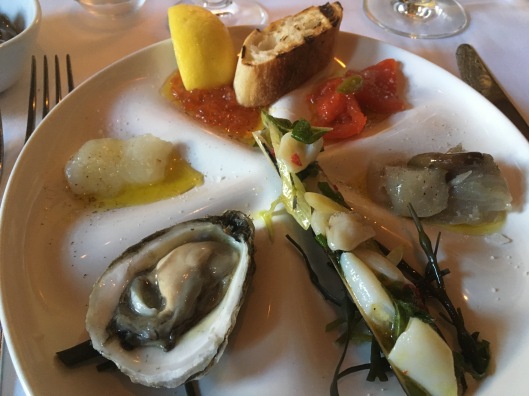 Unfortunately, not much else impressed me about Esca. My horror at encountering 1950s doo-wop continued. “Teenager in Love” was followed by any number of hackneyed hits from what is certainly a valid musical genre, but one which seemed completely and utterly out of place in a fine-dining establishment dedicated to exquisite fish cookery. The music contributed greatly to the feeling that the restaurant, located in the touristy theater district, was indeed a tourist trap, an engineered product meant more to sell than to enlighten.

The service was also concerning. Given that I was listening to “Earth Angel” in the background, the service was surprisingly stiff. I love elegance and formality, but not stiffness. I was clearly excited about being there, but my server reciprocated no such warmth, nor did he sense or feed off of my enthusiasm. I sensed no passion or commitment, just a guy doing a job in the stilted way he’d been trained to do it. It made me a little sad.

Equally concerning was the wine list. There were many wonderful bottles on the list, even some high-value ones alongside a disturbingly high percentage of $100+ bottles and a $1200 bottle of Barolo (rich bankers, anyone?). But I also saw a lot of red wines which might be well-known (Barbera, Chianti, Barolo), but which seemed totally out of place with a fish-driven menu. Why did their list include a $550 bottle of rich and jam-like Amarone but no example of the light and refreshing wine Bardolino from the shores of Lake Garda? One thing I love about all Batali restaurants is their use of the coravin device to extract a glass of wine from a bottle without removing the cork, which is a great way for a restaurant to offer, by the glass, an expensive wine which might go to waste if whole bottles were opened. I have drunk some memorable Barolo in this way. But did I really need to spend $82 on a 6 ounce glass of 10 year old Barolo from Oddero? Really? Overall, it was one of the most disappointing wine experiences I’ve had in a good restaurant.

My pasta was disappointing as well: trofie with pesto, mussels, and cherry tomatoes. 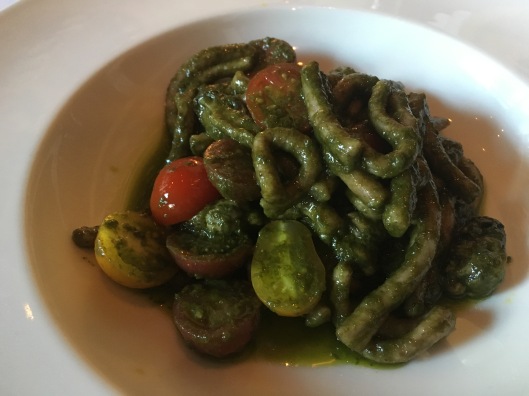 This is a classic dish from Liguria, but it was oversauced with pesto which was muddy rather than bright, and neither the mussels nor cherry tomatoes contributed any clear, memorable flavor, shocking given the laser-precise flavors which characterized my appetizer.

I lost a little confidence in the kitchen and was having childhood flashbacks of Top Gun, owing to the refrain of “You’ve got that loving feeling” clearly emanating from the sound system. I decided to skip a secondo course and move to dessert.

I can think of no better way to end a meal, especially of fish, than with sorbet. I really only wanted one little scoop of something, but in the contemporary American restaurant fashion I was permitted no less than three scoops when one would have been better. 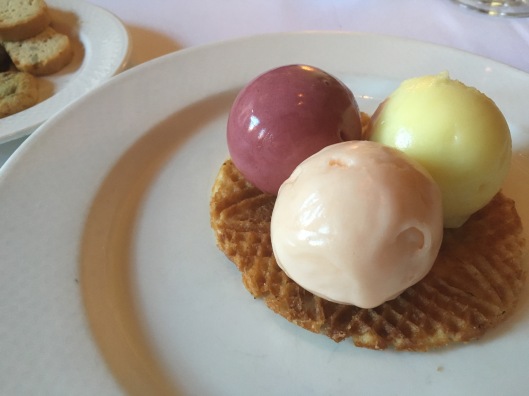 They were very successful, if perhaps lacking just a bit in personality or character.

I gave Esca one last chance to wow me, ordering a macchiato to conclude. It was decent, in a standard sort of way, but if only more restaurants and coffee bars would master the art of frothing milk properly! What one wants is frothed milk not reminiscent of soap suds but thick cream.

Having made no real connection to my server, I didn’t regret not seeing him on my way out. It took a few blocks to shake the soundtrack from my head. It has taken longer to shake my disappointment in a restaurant that is doing some things so well, and others with mediocrity. It’s been that way a long time, if one is to believe William Grimes’s first review of Esca, 17 years ago. I certainly haven’t given up on Esca, and it is cruel to make any conclusions about a place based on one visit. But maybe next time I’ll just sit at the bar, enjoy my crudi, and have appropriate expectations.

Please note that this is not a formal review. Among other things, a professional review is based on repeated visits to an establishment and eating through a larger portion of the menu. Instead, I simply offer some impressions of my first visit to Esca.