Sometimes falling in love with a person or a place takes time. When I first visited Venice I had mixed feelings, as many people do. Obviously the place is a cultural treasure and certain features of the city are unspeakably beautiful. But like many people, after 24 to 48 hours I was ready to go. Maybe it was the excessive crowds. Maybe it was the overtly touristy nature of the place, the theme-park character that many have written of and mourned.

My second visit was the same. I had a remarkable meal at my favorite restaurant, but the next day I was ready to go. It just felt like a place that where I didn’t want to spend too much time. I wasn’t alone in this feeling: the average visitor to Venice spends one day or less.

But I had a feeling that the problem was me, not the place. I had an instinct that if I pushed myself to get beyond the tourist veneer, there were great treasures waiting to be discovered; that if I somehow settled in, I’d be rewarded. I decided to rent an apartment rather than stay in a hotel on my next visit. I decided to visit the same coffee bars and bakeries for a few days in a row to get to know the proprietors. I decided to shop at the markets instead of just eating in restaurants.

And slowly I began to fall in love with Venice. Some loves are immediate and lasting. Others are sudden but ephemeral. Still others grow slowly, almost imperceptibly, until one wakes up one day and realizes that he or she thinks of the newly beloved person or place every day, that the person or place has become an inseparable part of their own identity. This is how it has been with me and Venice.

I love visiting Italy, and I love taking clients to Italy. I love Rome and Bologna and sharing those two cities with others. But I’ve never seriously considered living in either of those cities. They are places I love to visit, but they’re not home. On my last visit to Venice in September, I was caught off guard and surprised to find myself feeling deeply at home there, particularly the neighborhoods of San Polo and Santa Croce, where I was staying and spending most of my time. I found myself thinking a thought that I’d never experienced before: maybe I would like to live in Venice.

I began wondering what was drawing me. What made the place feel like home? Even more than the sheer beauty of the place, the magical fact that the city is built on water, I realized that a few things in particular were drawing me.

I realized how relaxing it was to be in a car-free city. Despite the human congestion of mid-day, early in the morning and late at night, or even mid-day in certain neighborhoods, Venice is a quiet city, too quiet for some. It’s not plagued with exhaust and speed. Venice moves at a slower pace than the rest of the world, a human pace.

I realized that in addition to the low-quality restaurants and trinkets and “Vivaldi” concerts with guys in wigs, Venice was home to the very best human culture had to offer. My favorite restaurant is in Venice, and it’s part of a restaurant association dedicated to quality ingredients and traditional cooking. Rome and Bologna have fine restaurants, of course, but no such association, no such community of shared purpose and values. Venice is home to traditional craftsmanship of the highest quality, whether true Murano glass or handmade gondolas. Venice is also home to La Fenice, one of the most famous and historically significant opera houses in the world.

I realized that all around me were people who shared my values: proprietors operating natural wine bars, merchants selling the freshest fish and vegetables, restaurants putting quality above profit, restaurants with something to say.

I realized that while I love our farm, we spend a lot of time feeling like we don’t quite fit in in our rural area. We love the community of small towns but the culture of cities. In Venice, I found both. I found people who were easier to get to know and friendlier than in other Italian cities. I found a place which supported and nourished the values I wish to live by. 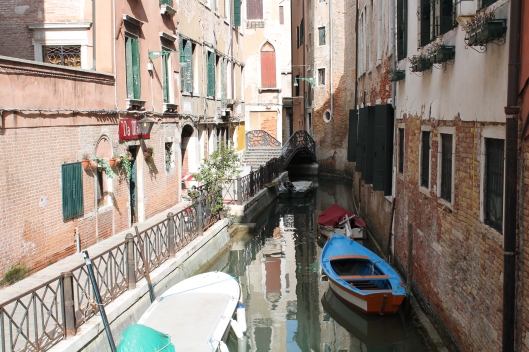 Venice, of course, is not perfect. Don’t misunderstand me. Like most of Italy, corruption is a real problem (Venice’s last mayor was arrested in 2014). The economy is a mess. And no doubt my experience of Venice is still that of a tourist, of a visitor. But for the first time in my life, I’ve connected to an Italian city which I feel like I could experience not as a visitor but as a resident. One which I’ve fallen in love with, which I think about every single day, and which feels like it could become home.

1 thought on “falling in love with Venice”